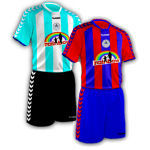 A shambles of a performance by Celtic saw them crash out of the Cheshire Senior cup against a side who wanted the silverware much more than Celtic did.

This manifested itself in the first fifteen seconds when Woodley lumped the ball down the field, it was chased by Hackney, threaded back to Norton who trundled the ball past Dootson as he came to narrow the angle. The ball rolled into the back of the net for possibly the fastest goal so far in this competition's history.

Celtic shook off this early shock and took the game to Woodley. Mayers' vision picked out Denham from a Fitzgerald cross, only to see the young striker volley over the bar. Wharton came next, finding an inch of space to lash in a low drive that was blocked by Dempsey. The full on assault came to fruition when Fitzgerald skipped past a clumsy challenge from Bromley and placed a perfect cross to the feet of Mayers. The ball stuck in the mud at Mayers' feet and he swung and missed. Higginbottom in the home goals scrambled across the net as Mayers readjusted and toe-poked the ball under Higginbottom. Dempsey ran into the net to hack clear the slow moving ball, but the ball had crossed the line, and the scores were levelled.

Hackney gave Celtic another warning shot when Wharton's pass back was woefully short for Dootson who raced out of his box. Hackney was always the favourite but fortunately hurried his shot and put it wide.

Celtic continued to attack, with Fitzgerald the supplier of some good crosses. One such was attempted to be nodded back into the danger zone by Mayers, but an unwitting Dempsey put it out for a corner. As usual from set-pieces this season, Celtic wasted the corner. Woodley are a short team, and with Keeling, Mayers, Pearce and Fitzgerald on Celtic's team, corners should have been put onto the penalty spot for them to beat their markers, but not one corner or free kick was taken this way.

Thus it was left for open play for Celtic to score their goals. An intelligent pass from Mayers put Denham through, one on one with Higginbottom. The ball bumbled right and Denham swerved left, allowing the home keeper to clear with a stretched out foot.

Celtic's free kick fiascos continued after Mayers was held 25 yards from goal. Everybody missed the chest high cross and it went for a free kick. Another, later after Eastwood had been held by Bromley went straight to the keeper, too high for everyone.

Eastwood skipped over a lunging tackle from Brown before laying the ball off to Denham. He too had leap smartly out of the way of a leg-breaker from Egerton before lashing a shot towards the goal that was straight at the keeper.

Denham's eye for goal sometimes blinds him to the easy opportunity. He controlled a throw expertly, juggling it in order to turn and shoot when a lay off to the perfectly placed Bowman would have been a better option. As it was Dempsey blocked the shot, which rebounded to Eastwood, who blazed over the bar.

A breathing space for Woodley came when Meakin cleverly dummied Fitzgerald giving him the time to pick out the unmarked Ryan with a perfect cross. Ryan wasted his header sending it well wide of the mark.

A decent free kick from Celtic originated when Fitzgerald was brought clumsily down in full flight by Brown. The ball pinged dangerously around the box before falling to Parr. He snapped off a shot that Dempsey blocked, putting it into the path of Bowman - who shot over.

Celtic looked like they were beginning to lose interest, and Woodley capitalised with Hackney winning a corner off Keeling. The corner fell to Hackney, but he blazed well wide of the mark.

Higginbottom got a bit cocky with a Dempsey back-pass. Denham raced down on him, and only a bit of luck stopped Denham from putting Celtic ahead. As it was, the hurried clearance fell to Mayers, and had to recover to put Mayers' first time shot around the post. The corner fell to Mayers, who headed it goal-ward - it was half cleared and put straight back in by Pearce. Denham attempted the overhead kick but missed, and the ball ran through to Higginbottom.

As the half began to run out, Wharton found half a yard of space, but his weak shot was straight at the keeper.

However, if anybody thought that the keeper couldn't produce, they were wrong. With almost the last kick of the half, Parr nodded a cross down to Denham who caught it sweetly and with some venom producing an outstanding save from Higginbottom.

Woodley wanted to start the second half in the same vein as the first, and immediately Brickell won a corner off Pearce. Keeling intercepted the corner, conceding a second. This time Dootson punched as far as Hackney, whose instant reply was a comfortable catch for Dootson.

Celtic started the half looking sprightly enough, with Eastwood taking advantage of a lucky bounce to go past Bromley, he found Denham, putting the ball at his strike partner's feet, and Denham looked certain to score, except for an excellent last ditch tackle from Dempsey.

Fitzgerald put the ball along the line, Eastwood dummied Bromley leaving the defender sat in the dirt as Eastwood raced one-on-one with Higginbottom. Eastwood relishes these chances, and took it with ease.

Sensing a second goal that would have clinched the tie, Eastwood found some space just inside the box and let loose. The keeper made an instinctive block, sending the ball back to Eastwood. The hit-man tried to put the ball to the side of the keeper, but saw his shot blocked by a mass of defenders, it came back to him a third time, this time Dempsey getting an unwitting deflection putting the ball out for a corner.

Celtic's display began to get sedentary, and though they continued to make chances, being one-up seemed to satisfy them. Numerous times the ball was needlessly given away, passes not reaching intended targets. Woodley though couldn't capitalise on this ineptitude, and Celtic's chances came and went without any lament from the field.

Wharton made Higginbottom work with a stinging drive from the edge of the box, but then wasted the resulting corner, and then Woodley did make use of the terrible display of passing from Celtic.

German blocked off Hackney and then looked for a pass, but his pass only found Hackney, who didn't need asking twice. With the last man wrong footed, Hackney made a diagonal run into the box and lofted the ball over Dootson and into the net in off the bar.

Celtic could have returned into the lead when Caldicott (on for Fitzgerald) whipped in a cross that Mayers headed towards goal. A point blank block from Higginbottom denied Mayers his second and the rebound came to Keeling, but his route to goal was blocked by Dempsey.

The Woodley punished Celtic again for their lacklustre performance. Caldicott lost the ball out by the wing, and Woodley pumped it forward. Brickell's first time shot beat Dootson, but came back off the post for substitute Johnson to head into an empty net.

Suddenly Celtic were a goal down, but to be brutally honest, it didn't look like it bothered them. However, Celtic continued to make (and squander) chances. An Eastwood cross was brought down expertly by Heald (on for Wharton) into the path of Denham, but his toe-poke went agonizingly wide.

Denham cut inside his marker to make some space, then went for glory rather than the cross, blazing over the bar.

Clegg (on for Bowman) put a great ball in for Parr, and his thumped header was powerful enough, but directed into the keeper's hands.

Heald found Clegg with a pin-point pass, but Dempsey (for the umpteenth time in the match) deflected it for a corner. As Celtic pushed further and further up field, a counter attack was always likely, and it came courtesy of Brickell, a player who had spurned Celtic in pre-season. He raced onto a lumped clearance into wide open spaces, found Meakin with a drag back, who slotted it into the net.

Now Celtic faced an impossible task, two goals down, with only stoppage time remaining. There was still time though for Bromley to concede a corner stopping Heald's run, and for that man Dempsey to clear Mayers' head from the resultant corner off the line.

The cheers from the dressing room as I left the ground indicated how much Woodley wanted this game, the way that they celebrated after every goal indicated how much they wanted it. Celtic must look into themselves as to why a team from two divisions down held their own in the first half, and outplayed them for large swathes of the second half.

If Celtic are to take anything from this game, it should be that there is no such thing as a walk in the park (however muddy). If they want results, they have to want to win more than the opposition. On this night, they didn't.