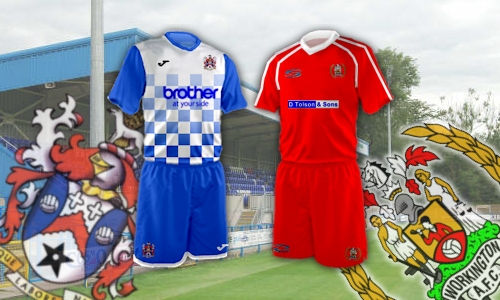 Celtic Win At Home To Workington
By Deborah Taylor

A single goal from substitute Neil Kengni proved enough to take all three points against a robust Workington side, who saw a player dismissed and survived a very clear cut penalty decision.

If anything, Workington had the better of the run of the ball in the opening period, virtually camping around the Celtic box at times. That said, Celtic had a cracker of chance in the opening minute when a free kick came to Danny Brady, his powerful shot deflected away for a corner and a Liam Tongue cross was inches away from the boot of Scott Bakkor sliding in at the back post. At the other end, powerful winger, Sam Joel, was causing the Celtic back line all kinds of problems, though his finishing was wayward, seeing one effort sail over the bar and another into Jake Turner's hands. Max Brown also fired tamely straight at Turner. Joel's next attempt was blocked Scott Wilson as Workington looked to press their advantage. With ten minutes left in the half, and a forced reshuffle for the visitors when Sam Smith limped off after twisting his ankle trying to contain Scott Bakkor, Celtic edged their noses in front, with both Bakkor and Marsden firing narrowly wide; Bakkor with a wicked angled cross and Marsden with an instinctive volley from the edge of the box, both a whisker away. Right at the end of the half, Michael Clarke rose highest on a corner, but put his header just over the bar.

Workington started the second half the stronger of the two teams, Bradley Hubbold twice testing Turner, the second bringing out an excellent stop from the Bolton loanee.

Just past the hour mark, Ross Dent was upended on the half way line, but not before he?d sent Neil Kengni scampering away down field, Matthew Douglas in hot pursuit. There was lunging tackle as the two entered the box causing Kengni to stumble and be forced wide. Aaron Taylor came out to intercept, but Kengni was quicker to the ball, sliding it in from the tightest of angles.

Five minutes later and it really should have been two nil, and game over, when Billy Akrigg's ball into the box was quite clearly handled, arm out stretched, hand to ball in everybody's book, except the day's official. Nothing given. If the first half had been ill tempered, the second half saw that turned up a notch, with a couple of awful fouls that saw a number of Workington players booked and Jason Walker dismissed without hesitation. Workington's frustration was showing clearly as they helped Celtic defend the one goal advantage with some wayward passing and woeful corners. Right before stoppage time began, Kengni could have given Celtic a modicum of breathing space when he latched onto Marsden's pull back and smashed a curling left footed shot for the top corner, which Taylor did well to reach and punch away for a corner.

There was still time in stoppage time for two more players to be booked and for Workington to win a corner that they failed to take advantage of, sending them home empty handed.