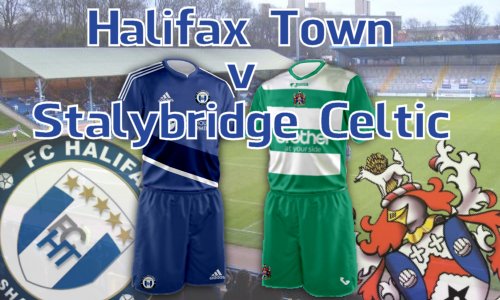 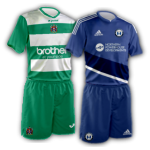 As games go it was not a classic ? with three Celtic players making debuts, Halifax the stronger team, with a better league record this season, we were always going to be up against it. Going in at half time one apiece did give Celtic a chance, but a lapse of concentration on a set-piece put us out of the cup.

The early running was all Halifax as the new players bedded in, Alex Simmons twice clearing the bar, one with a close range header, the other with a woeful shot, before Tom Denton's close range header brought a reaction stop out of Tony McMillan. A goal was coming, and it came when a whipped in cross to a melee of players saw Denton nod the ball out to Josh Wilde finishing the move he started bringing the ball down on his chest and slicing the ball to Tony McMillan's left.

Celtic were by no means out of it, and from a free kick, Celtic equalised. Danny Pilkington's cross into the box was about to be nodded into the back of the net by one of the debutants, Kiel O?Brien, until Tom Denton snuck in planted a powerful header into the top corner past his own keeper. Andy Owens got into a good position moments later during his ongoing tussle with Danny Hone, but couldn't get the power on his distance shot to trouble Steven Drench.

The second half was as scrappy as the first, the best chance for Celtic coming from a superb curling ball behind the defence from Steve Tames. Andy Owens stretched and diverted the ball, but not enough to make it creep in at the far post.

At times the game threatened to boil over, and it seemed a question of who would be sent off, before Halifax secured their win from a set-piece. The defence concentrated too heavily on Tom Denton, leaving Danny Wisdom to mark the three at the back post. When the Jordan Sinnott's free kick was too high for Denton, it came through to the three waiting at the back post and it was merely a question of who would nod it in, with Danny Hone taking the initiative to give Halifax a slender lead going into the last fifteen minutes.

Celtic would have two more chances, but could convert neither. Andy Owens was first, curling his shot through a crowd but without the power to trouble Drench, and a free kick at the death that Aidan Chippendale smashed into the wall instead of going down in Celtic history. Halifax could have put a gloss on the score-line in stoppage time, Jordan Sinnot's cross turning into a shot as it curled over McMillan, clipping the crossbar before being hacked clear.

In truth, this wasn't the best performance from Celtic, but though Halifax were the better team, they weren't massively better.