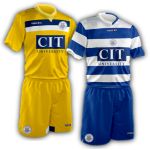 Andy Ralph, the goalkeeper who played two minutes for Celtic last season, was brought back into the squad after something of a goalkeeping crisis at the club. This time he got the full ninety minutes, but was unable to prevent Oxford from capitalising on Celtic's defensive frailties as the hosts netted twice in a minute.

It was a quiet opening from both teams, but sparked to life when Steve Basham pulled the ball back from the by-line for striking partner James Cook to drill home unchallenged.  Seconds later and it was two, with a Tom Winter cross not dealt with by the Celtic back line, and Basham doubled the Oxford lead with his head.

Celtic dug in and applied pressure to the home side, forcing a corner. Sean McConville's well worked corner came to Callum Warburton who fired through the crowd with an unstoppable shot Francoz could not reach.

Neither side could create anything clear cut, as Oxford put their backs to the wall, and stifled Celtic's passing game.

Throughout the second half, chances were at a premium, with Callum McNish and Chris Palmer shooting over, whilst at the other end, Greg Wilkinson twice went close, but Victor Francoz held well both times.

Tom Winters went squeakily close after getting a yard on Kelvin Bleau, and Oscar Durnin (on for Adam Pepper) could have levelled the scores late  on, with a looping effort, but Francoz claimed the ball well.

A game with few chances, and a minute of poor defending left Celtic with a long journey home.