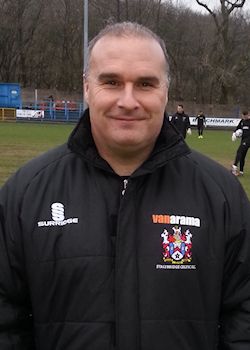 Mark was number two at Harrogate with John Reed, and came with him when John joined to turn the season at Celtic around. He started with Scunthorpe as a schoolboy, and went onto make over 60 first team appearances before Blackburn paid Ł45,000 for his services in 1988. Playing under Kenny Dalglish he moved from right-back to midfield and proved his mettle in the 1994-1995 season when he partnered Tim Sherwood at the heart of the Blackburn midfield, and won a Premiership Champions medal in the process. In September 1995, forced out of the team by David Batty, Mark made a ?1million move to Wolverhampton Wanderers in the (then) first division, scoring 8 goals and making over 100 appearances. He played just about every position for Wolves before joining Reading in 1999. After a loan spell with York City in 2000, he joined his home town team of Doncaster Rovers, and in 2001 joined Hull City.

Mark made his managerial debut for Shrewsbury Town in 2001 as player/manager, before becoming number two at Harrogate, and then following John Reed to Stalybridge, where he even managed a few more games before a pre-season friendly saw him stretchered off for a permanent playing retirement. After Celtic, he added to his management credentials when he became the manager at Matlock. After Andy Fearn announced his departure from the role of Assistant Manager at Celtic, Keith Briggs moved quickly to bring in Atko.