Celtic bounce back with a good win
By Iain Benson 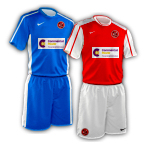 Celtic started the game nervously, the previous weeks result obviously still smarting. So it was the home team who started the brighter, with Phillips called into action early on to deny first Leadbetter's driven shot before Bell's thumping effort required a top notch save from the Celtic keeper, tipping the ball onto the bar and out. From the corner, former Celtic winger, Potts got his foot on the ball, but tried to lift it over Phillips, who made a simple catch.

Celtic did get forward, and Williams had a cracking run that ended with a shot into Hurst's arms, but most of the action was in Phillips's box and the Celtic keeper was in sparking form, pulling off a double save to first deny Bell's angled drive off a Potts cross, and then Leadbetter's follow-up from the rebound, Kay should have done better with the corner as he snuck in at the near post, but fired wide with his header.

The longer the game went goalless, the more relaxed Celtic looked and Briggs had a fearsome shot that Hurst only just reached, tipping the ball onto the crossbar for a corner Celtic could not convert.

Just when it looked like Celtic would reach half time without conceding, Barwick twisted his way around Beattie, only for Kay to take the ball off him, race down the wing and loft in a ball that Warlow lifted neatly over the closing quickly Phillips. When Potts ran to the Celtic fans to rile them, Phillips pulled him back, only to receive a yellow card for his actions.

Celtic needed a good start to the second half, and they got one. They came out looking fired up, and it wasn't long before Ellington laid the ball into Torpey's path, and the Celtic winger dodged three challenges before he got the space he needed at the edge of the box to fire an angled drive past Hurst to level the scoring.

The goal seemed to cause Fleetwood to fall apart, and when Platt lofted a cross to the back post, fellow substitute Joynes was at the back post to nod over Hurst for Ellington to nod into the net from inches. Celtic were suddenly in front.

Though Fleetwood pressed for an equaliser, they didn't threaten Phillips goal all half with some stalwart defending keeping them at bay. At times it was a case of riding luck and there were a few hairy moments but they kept Fleetwood out, and it was the Fleetwood box that was the one where the action was. Ellington was denied a second by a last ditch Santos leg, and Platt had a wicked effort that nearly caught Hurst off guard, the Fleetwood keeper tipping the shot around the post, but Celtic were content to play the ball into the corners by that time, counting out the hours added on.