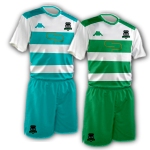 Stalybridge snatched the three points at the death against the other Celtic.

It started well for Stalybridge, with some great passing and movement that led to Ellington taking a chance, but hitting Santos instead of the net. Seconds later and Celtic were coming again, Ellington running at the Farsley centre-backs after some lovely interchanging with Barlow, before pulling the ball back for Williams to finish superbly.

The goal galvanised Farsley and they responded with urgency, and Stalybridge will be asking what they could have done better to stop Campbell from getting the space to shoot and firing in a powerful half volley in off the post.

Stalybridge struggled to get into the game, giving Farsley too much space all over the pitch, and Phillips had to be at his sparkling best to deny Campbell his second at the expense of a corner that Iqbal headed straight at Phillips.

Stalybridge continued to struggle at the start of the second half, but it was a gifted goal that put Farsley ahead, a throw to Keeling, Walshaw stealing the ball, one-on-one with Phillips, Walshaw did well to steer the ball home.

Going behind in this game seems to be the key event for galvanising the team, and Celtic came back strongly. With the goal early in the second half, there was plenty of time to correct the situation, and when Torpey got the space to line up a shot, it looked destined to be the equaliser until smacking into the woodwork and bouncing away to safety. Ellington put the ball narrowly wide after making space and turning inside the box and Woolliscroft perhaps should have pulled the ball back rather than take on the acute shot that hit the side netting.

Ellington made another of his dancing runs to get to the by-line, this time cutting back into the box. With Farsley all piling back into the box, it looked difficult to locate a Stalybridge shirt, so Ellington smacked the ball into the melee where Santos was on hand to turn it into his own net (the second time he has done so against Stalybridge), though the goal was officially given to Platt, who had just come on for Barwick and was watching from outside the six yard area.

Platt did get an effort on target, but Iqbal was in the way, and Ellington rising shot cleared the bar as Stalybridge went looking for a winner.

With Stalybridge pushing forward, there were gaps at the back, and Farsley could have taken all three points when substitute Bett stooped in and nodded Prendergast's cross towards goal, only for Phillips to pull of the save of the match. Campbell was on hand to turn the spilled ball into the net, but as soon as he touched it, the offside flag went up and Stalybridge were handed a lifeline.

They didn't waste it. Stalybridge pressed and pressed, compressing Farsley into their own box. A foul not far outside the area was struck low and hard by Smart, looping out for a corner. Stalybridge played it short and brought the ball into the box, there was attempts to stab home and clear from both sides until Smart, freshly on for Torpey, found the space and presence of mind to smash the ball home.

There was no time for Farsley to mount a comeback, and Celtic had come from 2-1 down to take all three points, narrowing the gap on the top two.