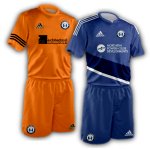 Halifax may have fielded the reserves, but that doesn't diminish the Celtic performance one iota, a performance that saw them rip Halifax apart. From all of the positives in the game, three needless goals were still conceded, meaning the game wasn't all it could have been.

Within the first minute, Celtic had taken two shots, the first deflected for a corner from Steve Smith (cleared), the second a good trap and turn from Parton, but his shot zipped narrowly wide. Celtic kept attacking, and Wilford got a corner as Elliss slid in to dispossess him in the box. The corner was overly complex, and cleared as far as Caldecott, whose cross-field ball found Ben Smith. Smith found Parton with an audacious lob over the defence, and Parton struck a sweet shot, forcing the visiting keeper, Parry to tip the ball around the post with an excellent stop. The corner was nodded down by Keeling to Denham, who produced another good stop. Celtic were completely dominant in the opening period, and Steve Smith put a great diagonal ball into the path of Wilford that had Cockerill back tracking into the box, the Halifax defender slid in well to dispossess him at the expense of a throw. The danger hadn't gone though, as Kerridge handled the throw. Wharton's free kick fooled the defence, but not Parry plucking the top corner free kick out of the air.

Celtic's good work finally paid off, and it was through the quick feet of Ben Smith. Smith looked to be loosing out to Kerridge, but nutmegged the visiting defender, and threaded the ball through to Denham putting him one-on-one with Parry. Denham couldn't have asked for a better start to his return to first team football, and slotted it past Parry with consummate ease.

Halifax barely had time to breathe. Steve Smith won the ball back straight off the restart, lobbed it out to Parton who dashed down the line, and whipped a superb low cross through the six-yard box for Wilford and Denham running in. It looked to have gone behind Denham, but he got his second goal in as many minutes with a cheeky back of the heel deflection that left Parry rooted to the spot.

Halifax finally got into the game and a clumsy challenge from Ben Smith right on the edge of the Celtic box gave Mascak his chance. He curled a superb free kick over the wall and Dootson had to be alert, tipping the ball over the bar for a corner. The corner was cleared, but Wharton kept the pressure on Celtic with a late challenge on Mascak. Celtic didn't clear the free kick well, with it landing at the feet of Woowckz; who blasted it towards goal. Dootson parried and Ben Smith tidied up. Halifax kept coming though, with an impressive spell that saw Steve Smith harshly adjudged to have fouled Woowckz. Woowckz got onto the free kick, volleying wide.

Celtic worked hard and got the ball back to their own strikers. Good linking play saw Denham put the ball into the path of Parton, who twisted around his man, and threaded the ball to Steve Smith, his first time shot struck the stuck out leg of Salm, for a corner. The corner came to Ben Smith; the volley struck Salm and came back to Smith, who squared it to Wharton, near the corner. Cockerill slid through Wharton. Ben Smith took the free kick quickly to Wharton. His shot was blocked and rebounded to Steve Smith. Desperate defenders closed him down but not before he curled a shot to the top corner that went narrowly wide.

Celtic were made to rue that miss as Halifax continued to improve. They passed the ball around the Celtic back line, the ball eventually falling to Mascak after a reverse pass from Woowckz unlocked the Celtic defence. One-on-one with an advancing Dootson, from a narrow angle he rifled it into the bottom corner.

Celtic tried the instant reply through Parton's good work ? but Elliss had other ideas, blocking at the expense of a corner. Parton nodded the near post corner into the back of the net, but the referee blew for an obstruction on the keeper by Denham. That didn't stop Celtic though. Wilford took on his marker, beat him and struck a low shot that ricocheted off Salm falling to Parton. An instant volley required a good parry from Parry, but Steve Smith running in at the back post had the simplest of tap-ins for his first goal for Celtic, and what a well deserved goal it was.

It was Halifax's turn to look for the instant reply, with Toulson latching onto a spooned clearance from Keeling, and volleying a diagonal shot wide past the far post. Moments later, another spooned clearance from Keeling saw Woowckz go one-on-one with Dootson. Dootson stayed up a long time, and got just enough of a finger on the lobbed shot to slow it down and allow Caldecott to clear off the line.

Celtic finished the half the stronger of the two sides, thanks to that clearance. Wilford tried a cheeky nutmeg shot through Elliss? legs, but Parry was well positioned and scooped up. Some nice interchange in the box saw Denham spread the ball to Ben Smith in the corner of the box, his curling shot was beyond the reach of Parry, but not Elliss, who conceded the corner. Halifax struggled to get the ball clear, and didn't do so convincingly. Parton soon brought the ball back into the box, as he was about to square to Denham running in to the penalty spot when O?Brien rashly tackled Parton from behind. The referee had no option but to point to the spot.

Denham was handed the ball by regular penalty taker Wilford, and for his hat-trick sent the keeper the wrong way, and Celtic in at half time 4-1 to the good.

Celtic looked to be continuing the good work at the start of the second half (without the injured Ben Smith, who was replaced by Hadland), Toulson clumsily bundled Denham over near the corner flag. The corner was delivered to an unmarked Denham at the edge of the area, but his shot clipped the crossbar and went out.

However, Halifax had obviously been given a roasting at half time, and looked more like a team. Toulson worked some space around the box, and his cross-cum-shot required a fingertip from Dootson to tip it around the post for a corner, which Pearce cleared.

Wilford teed up Denham after a good run, but Denham's shot cleared the bar, before Steve Smith's reverse pass into the path of Parton saw the loanee strike the ball first time, narrowly wide. An absolute superb switch of play from Caldecott saw him find Denham. There were two on the hat-trick hero immediately, but he fooled them both and struck a shot that required the knee of Cockerill to deny Denham his fourth. Sykes headed the corner into the six-yard box. Parton's header toward goal denied Denham a simple tap-in at the back post, and produced a great stop from Parry.

Hadland raced along the line, and was brought down in full flight by Cockerill, who deservedly received the evening's first yellow card. Celtic couldn't convert the free kick, and survived a corner scare before a Denham back heel into the box gave Parton something to chase, but again Parry thwarted Parton with another good stop. The keeper was being kept very busy by a bustling Celtic front line. Wilford found Steve Smith with a square ball along the edge of the penalty box, and again Parry was on top form to deny Smith's low driven shot. Steve Smith then turned provider, cutting the ball into the box for Parton who twisted around O?Brien and struck his shot straight into the midriff of Parry.

First Keeling, then Wharton put the Celtic goal under pressure with clumsy challenges, the first easily cleared, the second struck by Mascak curled around the wall and struck the post and out. Halifax kept pressurising, and Caldecott was the next guilty party, fouling Small. Wilford blocked the free kick, conceding the corner. Wilford's powerful headed clearance was put straight back in by Wacker, Hadland's unwitting deflection conceded a second corner. Hoyce climbed highest in the box, beating Sykes in the air (no mean feet), powerfully nodding the ball into the back of the net.

Steve Smith went for the instant reply, powering his way towards goal, he looked to have been brought down in the box by Salm, but the referee awarded the free kick right on the corner of the penalty area, as the referee had got everything else spot on, this was probably the right decision. The free kick found Keeling in defensive mode, heading wide of the mark. Hayward was brought on for the tiring Denham, and his first touch was to flick a lobbed ball into the path of Wilford, putting the lanky striker one-on-one with Parry. Wilford doesn't miss them, and he didn't taking the ball around the quick to ground keeper, and sliding the ball into the back of the net.

In full flight, Mascak scythed down Steve Smith and earned himself a yellow card. The free kick was taken shot to Smith; he took on two, found some space at the edge of the box, and rifled a low shot into the bottom corner to give Celtic a four goal lead. With only ten minutes left, surely Celtic had this one in the bag!

Halifax, to their credit, kept trying, and were playing some nice football. Sykes bundled Mascak over and Mascak took the free kick himself, this time striking the wall, and winning a corner. The corner sailed over everybody and to the boot of Wacker, unmarked at the far side of the penalty box, he volleyed the ball straight back and into the back of the net, reducing the arrears. Keeling fouled Woowckz, his rolling in agony got Keeling booked, and from the free kick, Dootson conceded a corner. This time, it was Small unmarked at the back of the box, after Dootson's palm on the ball put it to him he struck his shot towards goal, and Caldecott put the ball out for a second corner. Halifax were determined to make the score-line more respectable in the dying minutes. Hoyce again rose highest in the box, but too high this time, heading over the bar.

With the match in its final Parton was brought down after laying the ball off to Hayward by Toulson who received a booking. By rights, Toulson should have been sent off just seconds later when Parton twisted around him just inside the box, and he brought him down from behind, but a second penalty was punishment enough. This time Wilford tossed the ball to Steve Smith.

With the final kick of the game, Steve Smith capped off an outstanding performance with his third goal for Celtic coming from the spot.

Regardless of the opposition, this was a comprehensive performance from Celtic, let down by just one or two defensive errors. However, with the team on fire, it was a case of we?re going to score four more than you! A fantastic moral booster ahead of the crucial league clash at Hinckley's brand new stadium on Saturday, and another GLS cup match on Tuesday, away at Worksop (a chance to revenge the opening season draw).