Pre Season Continues With Another Win
By Deborah Taylor 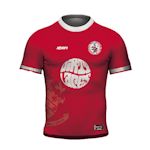 Despite a few threatening moments, the result was never really in doubt, despite being level at the break.

It started badly, when Ben Woods's cushioned back header to Tom Stewart left the Celtic custodian in a world of trouble. The Chadderton player duly grateful as he took the ball down, rounded Stewart and walked the ball into an empty net.

It was up to Celtic to mount a comeback, and Krisel Prifti tried with a very central free kick, but it was simplicity for the Chadderton keeper to catch. Chris Holroyd almost found the break through just before twenty minutes, but a last ditch saving tackle denied a simple goal for the Celtic striker.

However, an equaliser was on its way, and it arrived with an inch perfect through ball from Ant Williams for Prifti to race onto destroying an otherwise effective offside trap, and buried the ball across the face of the keeper.

Harry Freedman had a couple of good chances before the end of the half, a low drive blocked for a corner and a wicked curling free kick from a tight angle that required agility from the home keeper to keep out.

Chadderton's only real chance of the second half fell in the first few moments, when the substitute striker gained half a yard firing in a screamer that curled just wide of the upright, with Stewart a spectator. Freedman had a low shot that required a sharp reaction save and Holroyd was desperately unlucky latching onto a fast paced corner routine, turning the ball inches past the post.

Celtic deservedly took the lead when Ant Williams's forced a good stop, the keeper pushing the ball wide, only for Freedman to collect and fire the ball towards goal, going in off a defender's leg.

It should have been three when Holroyd got his head on a curling Woods free kick, but again, was wide of the mark, only for the third to go in right at the death as a long ball was brought down well by Mike Burke, who coolly lobbed the keeper to end the game with a flourish.