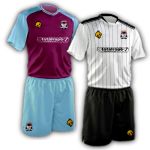 Two goals from Celtic opened their account this season, whilst Tony McMillan will be looking at his boots over the two Mossley put past him.

Tom Pratt opened the chances, firing wide, before Andy Keogh got to the near post to meet John Bennett's cross. It should have been bread and butter, but Keogh's header crept in. The lead didn't last long, Adam Farrell with a sudden burst of speed, nodding the ball past Tom Dean, chasing after it and providing a low cross to Glenn Mathews arriving at the back post with a primed side foot.

Just before half time, and Farrell again turned provider pushing the ball for Steve Tames to chase. He was under pressure from defence and Will Jones in the Mossley goal, but he stretched a leg and poked the ball past Jones.

The second half saw plenty of substitutions, but little action, the best effort from Celtic came from Liam Feeney with a shot on the run that Jones caught at the second attempt.

The equaliser came just past the seventy minute mark. A harsh free kick saw Tony McMillan well out of position, discussing positions with his defence. Kyle McGonigle didn't spend any time discussing anything, forty yards out, he fired in a bullet that barely rose as it crossed the distance. McMillan flew across to try and reach it, but had no chance.