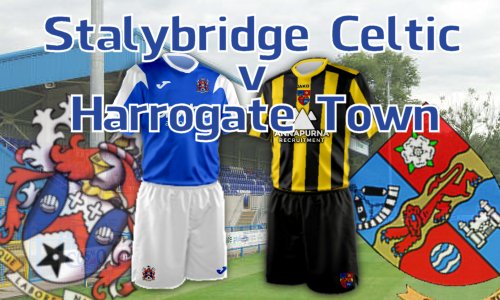 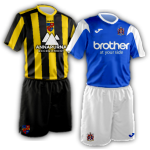 On Tuesday, Celtic face Harrogate Town. Harrogate town are eleventh on fifty-five points, ten places and sixteen points ahead of relegated Celtic. There will be a match centre and Twitter feed for this game.

After a good start this season, Harrogate had a very poor October to December with one win in ten games, and eight losses, that saw them tumble from the top three down into mid-table, which is where they have stayed since. Results picked up through January and February with one loss in eleven and six wins, but their last six matches have seen them stumble again, with a 3-3 draw at home to Salford the only point they've picked up in this period. Their last away win was a 3-2 victory over Darlington in February. Their last three away games have seen them lose 1-0 to Kidderminster, 3-2 to Tamworth and, most recently, 2-1 to Nuneaton. Had this been a game Celtic needed to win, there was a good chance of beating Harrogate! Harrogate's away form has seen them win five, draw six and lose eight.

Harrogate's top scorer this season is Simon Ainge with twenty-two goals, which puts him third in the overall league scorer's chart, and in a normal season that doesn't include Danny Rowe, in with contention for the League Golden Boot. On average, Harrogate have scored sixty-seven goals this season (twenty-three away), meaning on average they have scored 1.2 goals per game on the road, with double that at home giving them an average this season of 1.7 goals per game. They have conceded sixty-one goals (twenty-three away from home), with an average of 1.2 goals per game away, and 1.5 overall. Harrogate have kept five away clean sheets (eight overall) and failed to score in six away matches (nine overall). In the three away games they have been losing at half time, they have lost them all.

Celtic's last win over Harrogate was two seasons ago, when we won 2-1, Aidan Chippendale's late winner securing the points. Harrogate's last visit here was a 1-0 win for them, the last two meetings both at Wetherby Road, were also wins for Harrogate, beating us 2-1 and, this season, 3-1. There have been fifteen meetings here over the last thirty years, Celtic have won nine and Harrogate six.

Danny Wisdom is unlikely, having been stretchered off against Tamworth, whilst Matty Hughes is suspended until the end of the season. Nerves should no longer be a factor in the match now, with both sides having nothing to play for, but their final finishing position.