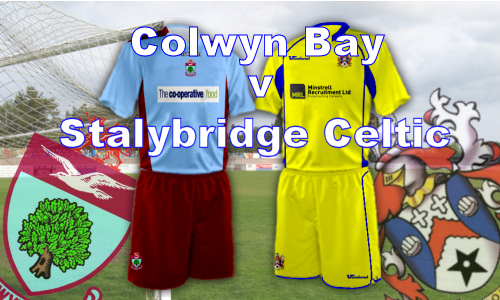 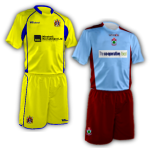 On Saturday, Celtic travel abroad to Colwyn Bay for the re-arranged Conference North clash (kick off 3pm). Colwyn Bay are currently thirteenth in the Blue Square Bet North table on seventeen points, fifteen points and eleven places behind Celtic. There will be a live match centre for this game.

The game was originally scheduled for Tuesday the 25th October, but due to both Celtic and Colwyn Bay exiting the FA Cup at the first hurdle, the game has been brought forward. Also brought forward is the Altrincham Vauxhall game and the Histon Boston game.

Colwyn Bay's results have been mixed this season. At home, they most recently drew against Solihull Moors with a goalless draw, before that they lost 6-1 to Altrincham, which stands as the heaviest home loss of the season so far. Colwyn Bay have won three times in six games this season, beating Eastwood 2-0, Workington 1-0 and Histon 2-1. Their other home game this season was at the start of the campaign, a game they lost 1-0 to Hyde. Away from home, Colwyn Bay have been equally inconsistent. They won on the opening day beating Bishop's Stortford 2-0, drew 1-1 with Halifax and losing 2-0 at Guiseley. A 1-0 win at Gloucester was sandwiched between a 2-1 loss at Droylsden and a 3-1 loss at Hinckley - their most recent game.

This means that Colwyn Bay have conceded nine goals and scored twice in their last three games, without a win. On their day, they do have a good defence, and have kept five clean sheets this season, three of which were at home, and one was in the 0-0 Solihull game, which was their last match.

Over the last fifteen years, we've encountered Colwyn Bay ten times. Our last meeting was back in January 2003 in the President's Cup, a game Celtic won 3-0 at Bower Fold. Over those ten encounters, Colwyn Bay have managed two draws, but have never beaten us. Though our last visit to Llanelian Road was a 1-1 draw, our previous visit was a 7-1 victory. A repeat of that would do wonders for our goal-difference.

Colwyn Bay's leading goal scorer this season is Jon Newby, who has four goals. Danny Lloyd-McGoldrick and Rob Hopley are both on two. They score an average of a goal a game (both home and away), and concede 1.3 goals per game (again, both home and away). Two thirds of their goals are scored in the second half, with just after the restart their most dangerous period, with four goals, which is a third of their total. They also concede twice as many in the second period as in the first half, with their most vulnerable period around the seventy-five minute mark seeing them concede six of their sixteen goals this season.

Colwyn Bay have no suspensions ahead of the match, and but are still without three players through injury: Luke Denson, Mike Lea and Gareth Evans. They have brought in central defender Matty Hughes on loan from Fleetwood Town, and bolstered the midfield by loaning midfielder Bradley Barnes from Chester. In their last match, the 3-1 defeat away at Hinckley United, Colwyn Bay lined up as:
1. Chris Sanna
2. Liam Benson
3. Chris King
4. Matty Hughes
5. Danny Meadowcroft
6. John McKenna
7. Bradley Barnes
8. Damian Allen
9. Jon Newby
10. Domaine Rouse
11. Danny Lloyd

Celtic have a chance to go top of the Blue Square Table against Colwyn Bay, and could do with improving goal-difference, the automated prediction algorithm is suggesting we will, with its predicted 3-1 score-line in Celtic's favour. In our last match, the 2-1 away win at Corby Town, Celtic lined up as:
1. Jan Budtz
2. Kristian Platt
3. Andy McWilliams
4. Rhys Meynell
5. Chris Lynch
6. Jack Rea
7. Connor Jennings
8. Greg Wilkinson
9. Phil Marsh
10. Stephen Brogan
11. Callum Warburton

With most of the teams in the league in FA Cup action this weekend, there are just two other games in the league:
Altrincham (19pts 6th) v Vauxhall Motors (11pts 18th)
Histon (13pts 15th) v Boston United (17pts 12th)

From the M60, take Junction 4 onto the M56.
Follow the M56 to its conclusion at a roundabout.
At the roundabout, turn left (exit 1 of 3) onto the A5117.
Less than a mile down the road, there is a second roundabout.
Go straight across (exit 2 of 4) to stay on the A5117.
After about 3 miles, you will reach a t-junction with the A550.
Turn left onto the A550.
The A550 turns into the A494 just after the slip-road for Sealand.
Stay on this road, until the junction for the A55 (signposted Colwyn Bay).
Leave here.
Stay on the A55 for about 26 miles, coming off at the junction for Old Colwyn.
At the the end of the slip-road, turn left onto the B5383 (Llanelian Road).
After a 100 yards there is a crossroads, with the Marine Hotel on the left.
Go straight across to stay on Llanelian Road, after about 1/2 mile the ground is on the right just past a grassy bank, opposite some houses.