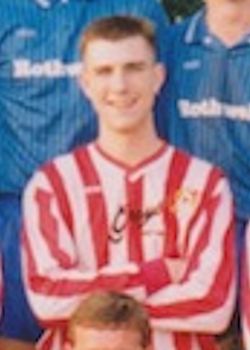 Kevin scored just one goal, when he came off the bench in the 3-1 away league defeat at Gainsborough Trinity in December 1991. After Celtic, Kevin went to Ashton united, and then had the first of two stints at Mossley the first in 1993, then again in 1999 taking his appearance with the Lilywhites up to 30 appearances and 6 goals, with spells at Flixton and Glossop North End in between. After his second spell at Mossley, he returned to Glossop and then joined Woodley Sports, where he scored an equaliser against Celtic.
Career
Position
Striker
Joined
28th Sep 1991
Left
1st Mar 1992
Last App
25th Feb 1992
Last Goal
7th Dec 1991
Career
Appearances
9
As Sub
6
Subbed off
2
Goals
1
Assists
0
Red Cards
0
Yellow Cards
0
Points
11 / 27
Average Points
1.22
Wins
3
Draws
2
Losses
4
Total Pitch Time
390 mins
Appearances
Sponsors
Main club sponsor