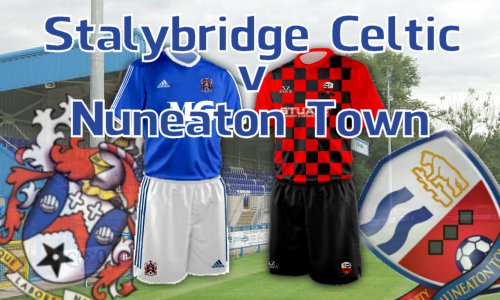 Off The Pace
By Debbie Taylor 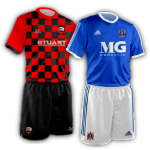 Nuneaton won't have many easier games this season, as despite two goals from Celtic, Nuneaton were the superior team.

Twice Tony McMillan had to take the ball at feet and Vanera Sanoga headed into the side netting before a training ground move sliced Celtic open, Shane Byrne with his back to goal put the ball into Rob Duffy's path and he struck his shot perfectly beyond the reach of McMillan. Moments later and Nuneaton did it again, this time Duffy put the ball out to Elliot Whitehouse and he rifled his shot into the bottom corner. Beyond that, Nuneaton seemed to have the freedom of Bower Fold with Celtic only getting close right at the end of the half, with Aidan Chippendale's cross for Ben McKenna but for good defending from Jordan Keane, it would have been a tap in for McKenna, instead Celtic had a corner.

The second half was equally woeful from a Celtic perspective.

Rob Duffy's flick behind the Celtic defence allowed Whitehouse to race through one-on-one with McMillan, he kept his cool and rolled the ball past McMillan. Both David Morgan and Duffy could have added to the misery, but McMillan was Celtic's last line of defence and was doing admirably under difficult conditions.

Celtic pulled a goal back after some good play that belied the rest of the game, Oliver Crowley putting a great ball into Adam Farrell who turned well and fired past Jordan Smith.

Any chance that Celtic had of getting back into the game was snuffed out with Nuneaton's fourth when a low corner came into the box, and Marlon Harewood turned it in. It would have been five sooner when Harewood went one-on-one with McMillan, and fired past him, only for the offside Whitehouse looking for his hattrick to turn the ball in and have it chalked off. Instead the fifth came with ten minutes to go when Harewood laid the ball into the path of Shane Byrne in acres of space to put in a good finish that gave McMillan no chance.

A consolation goal came in stoppage time for Celtic, when McKenna found Steve Tames who turned and fired across Smith, only for the Nuneaton keeper to pull off a good save. However, Danny Burns was following up ? something Celtic hadn't been doing all game ? and slotted home.

It was too little, too late, and while Celtic didn't drop any places, Lowestoft and Brackley moved to within striking distance of Celtic. There's no more room for slip ups for Celtic now.