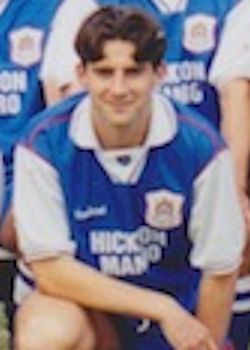 Jamie joined Celtic from Conference team Runcorn, and was almost ever present during his two seasons with us, he was tempted away to join Northwich Victoria in 1998, where he played for two years before requesting a transfer out of the sinking ship. After a stint with Chorley, Maine Road and he joined Salford. In 2004, he made the move to Bacup Borough and then to Rossendale in 2005, and then to Flixton at the start of the 05/06 season.
Career
Position
Defender
Joined
1st Jul 1996
Left
30th Jun 1998
Last App
28th Apr 1998
Last Goal
1st Nov 1997
Career
Appearances
69
As Sub
4
Subbed off
4
Goals
1
Assists
0
Red Cards
0
Yellow Cards
0
Points
78 / 207
Average Points
1.13
Wins
21
Draws
15
Losses
33
Total Pitch Time
5850 mins
Appearances
Sponsors
Main club sponsor